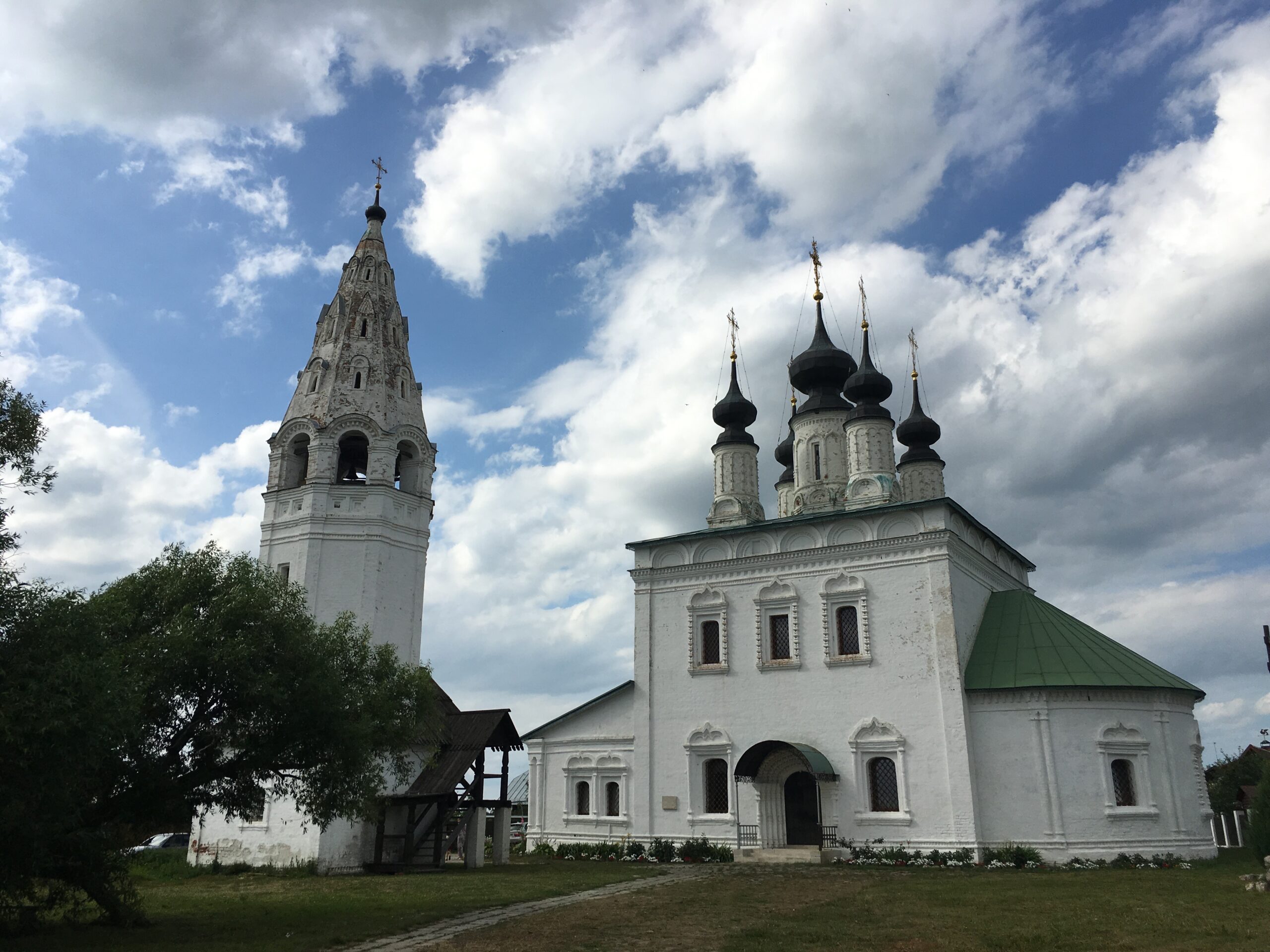 Any trip to Suzdal is one to remember thanks to its outstanding white limestone architecture, countless UNESCO World Heritage monuments, and of course it’s rustic country village feel. This city is synonymous to the neighboring city of Vladimir thanks to their longstanding history as the birthplace of the Russian language and nationality.

While Vladimir is more city oriented, Suzdal is its complete counterpart – complete with green meadows, open air museums, and its serene atmosphere. The two may be complete opposites but they are equally integral to the culture and history of Russia. In fact, because Suzdal is only a two hour train ride from Vladimir, we recommend that you stay the night in Vladimir so that you have enough time to take in Suzdal’s beauty.

If you find yourself on a day trip to Suzdal, don’t forget to bring your camera! This city is full of picturesque architecture that will make you feel like you are traveling back to the past. Below are some interesting locations you can expect to encounter on a single day’s walk in the middle of this city. From the northern area of the city to the southern area, here is how we spent a trip trekking along this wonderful city during the middle of August.

We began our trip by visiting this mid 13th century church on the left bank of the Kamenka River. It was built by the order of the former Grand Prince of Vladimir, Alexander Yaroslavich Nevskyl who intended to make it into a convent. However, this Alexander Convent was completely destroyed by the Poles around 1608.

It was later transformed into a parish church in 1695. The Church of the Ascension and a bell tower were also built around this time. In 2006, this location became a male monastery. It is a small cube shaped church with an accompanying side chapel and is currently undergoing some construction. Visitors are able to visit the bell tower with permission. This destination is not very popular with tourists, however it is nonetheless very beautiful. Cathedral of the Deposition of the Robe

Founded in 1207, this complex is home to the tallest building in Suzdal. It is composed of the triple-domed Cathedral of the Deposition of the Robe, a bell tower, and the Holy Gates which is made up of two towers.

Together these structures form part of the Grand Kremlin Palace, which means that they form an Official Residence of the President of the Russian Federation. It is mostly closed to the public save for the tallest building which is accessible to the public at an admission rate of about 100 rubles. There is also a small exhibition of wooden sculptures from the 15th to 17th centuries inside of the cathedral.

If there’s anything Suzdal is known for, it is its various churches. While many are inaccessible to the general public, they make for interesting sightings and gorgeous pictures. This small orthodox church is one of the few that are accessible. Inside you’ll find centuries old frescoes and a roomy interior. Check out all the churches in the surrounding area. Memorial to the Fallen of the Second World War

This monument is located inside of the Gorodskoy Skver (City Gardens). It is dedicated to the fallen soldiers of the Second World War. It was founded in 1986 and features an eternal flame in the middle of the monument.

A must visit location for those who want to immerse themselves in the culinary aspect of Russian culture. If you’re in search of something entertaining and immersive, consider taking a bread baking course in the restaurant. The staff will show you how to bake traditional bread, crumbly croissants, and pretzels firsthand. Children and adults alike will enjoy learning all about braiding bread and shaping it just right.

Nativity of the Virgin Cathedral (Rozhdestvensky) in the Suzdal Kremlin

The heart of Suzdal rests in the legendary Suzdal Kremlin where visitors can catch a glimpse of the notorious blue onion domes lined with golden stars. Built in 1225 under the reign of Yuri II of Vladimir, this church is made of white limestone. The structure currently hails as one of the eight White Monuments in Suzdal and Vladimir.

This open air museum is located at the bank of the Kamenka River right on the outskirts of the city. If you should visit any museum on your trip to Suzdal, it should definitely be this one. This “living village” is an ode to the Russian way of life during the 17th to 19th centuries.

From sleds, tools, and traditional clothing to  windmills and barns, visitors can travel back in time and witness the rustic lifestyle of the Russian peasant family.

Upon visit be sure to keep an eye out for the Church of Transfiguration, which was built in 1756. This three level wooden church was originally built in the village of Kozlyatyevo in the Kolchugino District, but later moved to the museum in 1965. Inside the Museum of Wooden Architecture and Peasant Life    ©Dennis Cieri

If you find yourself in Suzdal in the middle of July, then you’re in luck! It’s around this time of year that the Cucumber Festival takes place all throughout the city of Suzdal. Although the cucumber isn’t native to Russia, it is hailed as one of the most important vegetables in the country. The center of the festival takes place in the Museum of Wooden Architecture and Peasant Life, where vendors display locally grown cucumbers along with other delicacies such as wines, fruit juice, and pies and cakes. It is here where you will see cucumbers prepared in almost every way possible. Come for the excitement and stay for the cucumber eating contest which also takes place at this festival! Take a stroll along the museum and you’ll also see folks wearing cucumber shaped masks and clothes.

This beautiful church was originally built out of wood in the second half of the 17th century. After suffering from a devastating fire that had been part of a revenge tactic by Peter the Great in 1719, it was rebuilt in 1720 out of stone. Today, it is an integral part of the Suzdal Kremlin.

Church of Saints Boris and Gleb

The exact year this church was built is debated, however what we can all agree on is that the Church of Saint Boris and Gleb has a vigorous history that has managed to follow it to this day. The baroque – style church sees a 17th century foundation along with 18th-century baroque detailing. Its inception is one that is marked by the deaths of the two brothers Boris and Gleb who were murdered during the internecine wars of 1015–1019 and canonized after their death. It is located in the exact area where the brothers were said to have met.