Spend a Day with Us in Russia’s Fifth Largest City: Nizhny Novgorod 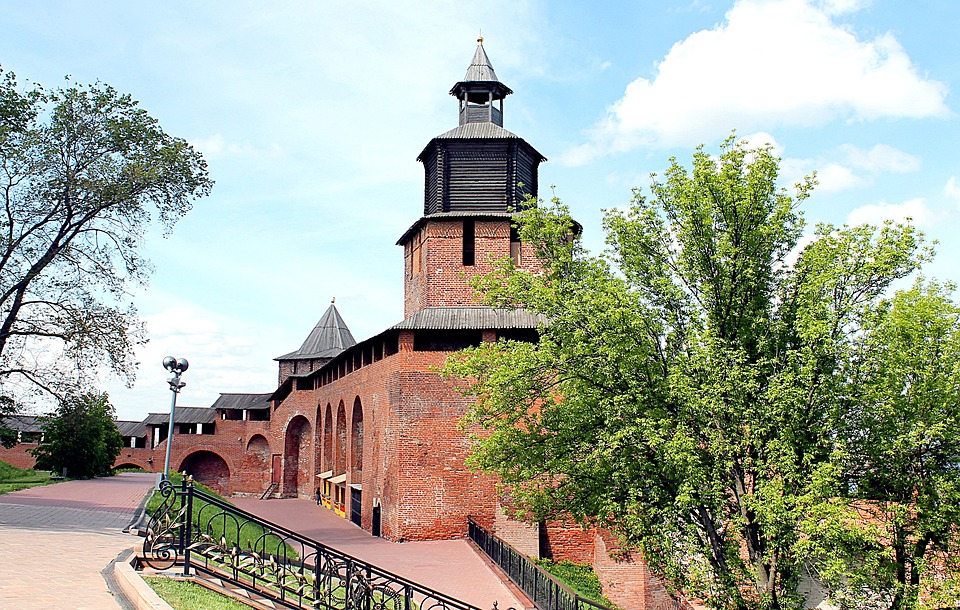 Those who are fans of soccer may remember this city as one of the main locations that hosted the quarter-final for the 2018 FIFA World Cup.

At the time, the blue and white Volga region – inspired stadium, Nizhny Novgorod Stadium seated about 45,000 spectators who cheered on their favorite teams from the sidelines. The stadium in particular, was strategically built in a circular shape to provide favorable views for all spectators. It currently stands less than 3 kilometers from the heart of the city on the west bank of the river Volga where the Oka and Volga rivers meet. Today, the legacy of sportsmanship and the city’s innovative spirit courses through its veins. From its fascinating industrial atmosphere, to its military – based architecture, the city offers its visitors a glimpse into a critical era of development for Russia as well as its journey to becoming a modern metropolis.

Here are some of the interesting things we saw on our trip to the booming cultural metropolis:

This Kremlin is the crown jewel of the city known for its size and history as a military fortress. It is the oldest Kremlin in all of Russia. In its heyday, this massive structure was an administrative, social and religious centre which not only protected the city from invaders, but also kept important chronicles that tell the history of this great country.

Upon visiting today, visitors can roam around the vicinity freely to admire the different towers that still stand. There are also restoration workshops, the library, the philharmonic, and a college, along with art and music schools. Formerly closed to foreigners until 1991, the city has morphed into one that takes pride in showing its critical role in Russia’s history. We spent about an hour and a half roaming this structure alone.

Walking along this picturesque tower, you will find yourself with things such as a 41 – meter observation tower, monuments to literary author Maxim Gorky (which is who the city was named after for a brief period of time), a memorial complex in honor of Nizhny Novgorod citizens who died in World War II, and an exhibition of the very first military vehicles to have ever hit Russia.

This church is one of the older buildings in the Nizhny Novgorod Kremlin dating back to the founding of the city. This recognized cultural heritage site was consecrated in honor of the patron saint of the Russian army, the Archangel Michael.

It’s long history begins with its construction in 1221. A wooden church back then, it was soon replaced by a stone building and later rebuilt again as a church at the Grand Duke’s mansions in which princes were buried. During an invasion by the Tatars in 1377 and 1378, it was burned down and abandoned until the country’s restoration period in 1625. By then, it was rebuilt by the state treasury, who built it in honor of the people’s militia in 1612 and thereby saint Archangel Michael – the patron saint of soldiers. From there, the church saw many waves of restoration and change.

Monument to Prince Yury Vsevolodovich and Bishop Simon of Suzdal

This monument commemorates Prince Yury Vsevolodovich, who was the last of the Russian Great Princes of the pre-Mongolian era and whose defeat on the Sit river played a crucial part in history. Take a break from exploring and head to the nearby Chkalov Staircase. This beloved leisure are offers a picture worthy view of the Volga River and the nearby piers below. The stairs themselves consist of 560 steps in a figure-eight shape which are illuminated at night. Chakalov Staircase is named after the world-famous test pilot and hero of the Soviet Union Valery Chkalov, who became the first man to complete a non-stop flight through the North Pole from Moscow into Vancouver (Washington, USA) in 1937. A statue in his honor can be found at the top of the stairs. Walk down the steps and you’ll be met with the mighty Volga river as well as a stunning pier where you can catch a glimpse of the notorious Geroy Boat (which translates to Hero Boat). The boat was formerly a part of the Volgian military fleet which played a critical role in the Battle at Stalingrad during the Great Patriotic War.

And of course, no first visit to Nizhny Novgorod is complete without at least seeing the sculpture of the stainless steel deer. The 5-meter-long artwork was built in Budapest by Gábor Miklós Szőke. Today, the deer is part of the city’s official coat of arms, symbolizing nobility, purity and greatness, life, wisdom and justice. Monument to Minin and Pozharsky

This monument commemorates Minin and Pozharsky, who gathered the notorious people’s militia who waged war on Polish invaders. This statue has been located in the middle of the city square since 2005. Nizhny Novgorod is Minin’s hometown. Monument to Minin and Pozharsky

Church of the nativity of the blessed virgin aka Rozhdestvenskaya Tserkov’

This Russian Orthodox church was built in 1696-1719 through a commission by merchant Grigory Stroganov. It is two levels tall with a three-apsidal altar at the top, a prayer hall, a refectory and a porch. The temple is five domes large, repainted to reflect the one in Moscow. The church, also referred to as Stroganov church, is a landmark of engineering of government essentialness. The city’s charm is largely due to its rustic and peaceful way of life. The trams in the city of Nizhny Novgorod stretch approximately 198 km (123 mi) and feature hand painted advertisements. They are a crucial part of public transportation in the city along with  a small subway system (Nizhny Novgorod Metro), marshrutkas or minibuses, buses and trolleybuses.

Tram rails in the city