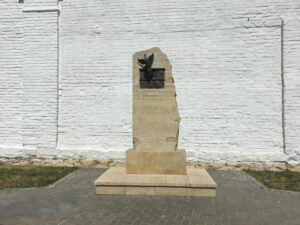 Sviyazhsk is an island town located directly where the Volga and Sviyaga Rivers meet. It has a small population of about 250 people, it’s 60km east of Kazan and 820km east of Moscow, and it’s a relatively small rural city. So why does it see hundreds of thousands of tourists every year?

Well, the reason people flock to this city is due to its fairy-tale like atmosphere. Everything on the island is steeped in history. From its magnificent architecture to its historical roots, people come here to not only understand, but to literally feel Russia’s history for themselves.

Our visit to this city was so inspiring, that we almost didn’t want to leave. Here are some of the things that you can expect to see on your trip to Sviyazhsk along with some interesting features that are definitely worth noting.

“ Sviyazhsk was founded by Ivan the Terrible to aid his conquest of Kazan. Today the settlement is located on an island connected to the mainland via a dam. The city can be visited from Kazan, but it is much simpler to visit in summer months when you can get a ferry. “ – Rusmania

Monument to Victims of Political Repression

This sleek monument commemorates those who were victims of political repression, or more specifically, those who lost their lives in Sviyazhsk. This location is especially important as it is where the Sviyazhsky Uspensky Monastery was turned into the correctional-work colony No. 5, which was part of the Gulag system of camps in 1936. This camp held thousands of prisoners who were forced into harsh conditions and were buried in unmarked graves. The prison camp was run until 1953. Gostiny Dvor is a historic Russian term for ‘indoor market’ or ‘shopping center’. On our visit to this city, we just had to stop by and see all the beautiful artisanal items sold by the local merchants. Once there, we saw Blacksmith items, clay crafts, and delicious foods. The island is very well kept and filled with greenery. The streets are also very clean and ample, making for a lot of opportunities to take your time to stop and admire the island’s charm. This male Russian Orthodox Monastery was built in 1555, during the period of Ivan the Terrible. During this time, Christianity was in the process of being spread throughout Tatarstan. In 1923, the USSR’s Anti-Religion Campaign seized the church and converted it into a prison and later a psychiatric hospital. Today, the church is renowned for  interesting 16th-century frescoes, such as a rare image of St. Christopher depicted with a horse’s head. The church is also hailed as a UNESCO World Heritage Site. Over the years Sviyazhsk has become something of an open – air museum. There are actual established museums such as the Ostrov-Grad Museum which is located in a municipal building from the 1800’s and traces local history and includes a recreated jail cell. But then there are also temples and wooden buildings strewn all over the island (many of which are being restored to their original glory). According to The Network of Institutes and Schools of Public Administration in Central and Eastern Europe (NISPAcee), every church and merchant house in Sviyazhsk has its own patron from important people of Tatarstan. On select holidays there are medieval themed folk festivals and Russian tea parties. Church of Constantine and Helena

This beauty was built out of wood at the end of the 17th century and named after Emperor Constantine the Great and his mother Elena. Over time, the church underwent various changes and was rebuilt several times. The current edifice was built back in 1832 During Soviet times, the church did not operate. It was officially opened sometime in the 90s – 20th century as a venue for exhibitions. Today, the church performs baptisms and houses a school gymnasium on its grounds. It’s no secret that the city was built in 1551 by the troops of Ivan the Terrible in just 4 weeks. This impressive feat was part of a plan to build a base from which Ivan IV would stage his final and successful assault on the khanate of Kazan in 1551. After its success, Sviyazhsk became an important town, which propelled its monastery’s religious importance during the centuries that followed.

During the years of Bolshevik rule, this monastery became a part of a forced labor camp. Later, it was used as a detention camp for juvenile delinquents. And up until 1993, this land was used as a psycho-neurological clinic. The church was restored into its original purpose in 1997.

The following three churches make up this critical monastery.

Joy of All Who Sorrow Cathedral (the Main Church)

The crème de la crème of the architecture monuments in the island, Joy of All Who Sorrow Church is a red brick building characterized by silver, Byzantine Revival Style domes. The church is dedicated to the Icon of the Mother of God “The Joy of All the Sorrowful”. It was desecrated after the Soviet period, the icons and many of the paintings were removed. It is currently undergoing restoration. Trinity Church (To the Left of JoAWS)

Ah the wooden church! This magnificent church is very rarely open to the public, but those who are anywhere close to this church will be able to catch its wooden scent. The Trinity church was built without a single nail sometime in the 16th Century and has remained intact to this day! Like the grand island it stands on, this church was also built in a single day from pre carved pieces. This church was brought to Sviyazhsk by Ivan IV’s army, making it one of the oldest churches in the city. St Sergius of Radonezh’s Church (To the Right of JoAWS)

Established in 1604, this quaint church is named after St. Sergius of Radonezh, a spiritual leader and monastic reformer of medieval Russia. Although the icon of the spiritual leader is kept at the Church of the Miracle – Workers of Yaroslavl in Kazan, this church is still important to the history and the people of the island. The church is closed to the public, but if you’re close by, you can enjoy looking at it along with a stunning view of the lake just behind it.